Jet Magazine and Ebony Magazine, the premiere popular magazines for African-Americans from the war era and continuing, published many articles that reflected the issues of the times. 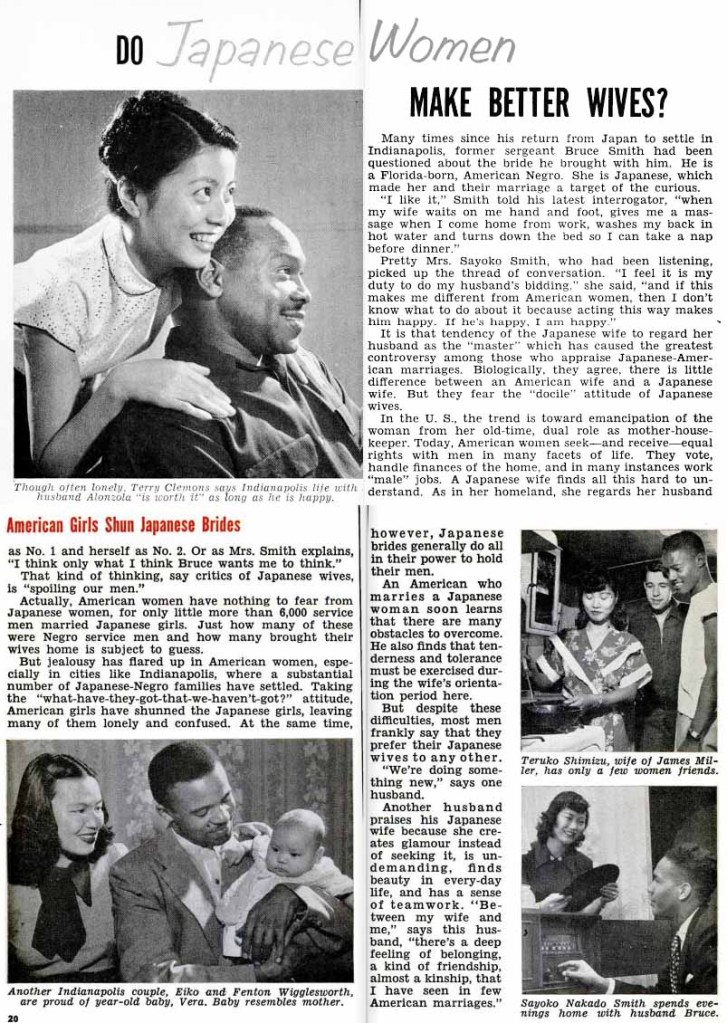 In reading and seeing these articles, we can see that if we compare them to articles that exist now, including blogs and websites on interracial marriage, black/asian relations and blackness, and so on, that not much has changed.  It is because of the way we make “race,” which then by its very nature, maintains racisms as well.

It is also true that in the postwar period, it was a form of propaganda to make positive images of Japanese women with Black military men in order to heal the virulent racisms of the war-period, when the Japanese women were written as violent, murderous and trecherous geisha women, akin to dragon ladies.  A way to transform *that* racism, is to create the images into softer racisms.  This also meant that Blackness was also written in certain ways as well.

When American servicemen wanted to bring their Japanese wives and girlfriends home, there were strict quotas that left three/quarters of the marriages split, not allowing all but a few thousand couples.  My father, for instance, had to find a pastor in St. Louis, to marry my mother.  Then, bringing my mother and I to the United States would be another eight years.

In the US press, especially the African-American press, there were fierce debates on Japanese wives of their Black husbands.  How they would fit in?  Were they too Oriental to adapt to the US?  Were they better than African-American women as wives because of their seemingly obedient behavior and deference to their men?  One can only imagine the diverse opinions and thoughts, academic and journalistic, popular and unpopular, that circulated in the communities.

These were not just opinions.  Opinions have their pre-formed trains of thought, as well as their effects in behavior.  For some Japanese women, they were literally held up in their homes and hidden.  For others there was outward physical fighting.  For others, this meant that the African-American man would have to leave his neighborhood because of violence and prejudice.  For others still, this meant a mixture of things.  For my parents, for instance, visiting my father’s family meant we were warmly accepted from the beginning, along with some neighbors, but quite a bit of terrible prejudices as well, and admonishments by my father to stay away from certain areas of his family’s street, and not to go out alone.

This also brought tense relationships between Black men and Black women in the US, wherever Japanese brides were brought home.  Of course it was mixed.  There were many Black women who related to the plight of Japanese wives, and their second-class status in society, and were warmly accepted.  For others, as was most of the case, the Japanese women were the Asian other.  For others, these new Japanese women were their competition, weakening the Black lineage by their men not being attracted to Black women.  My father, for instance, had many Black women girlfriends, yet he said that he liked Japanese women better because they weren’t so selfish and loud–internalizing and intensifying internalized racism.  The internalizing of gendered racism is a factor in all of our lives, not just for Black men.

And in speaking of this image of the demure Asian, my father found out later that this “obedience” was not some natural Asian trait, but a culturally learned act of survival and relationship for harmony.  My mother was a rebel.  After all, what kind of Japanese women in Postwar Japan, would go with an African-American military man?  This was no easy feat.  It was envied and also hated.  Like many things in life, it is contradictory and fraught with chances for violent opposition and intense desire on the part of Japanese women.  Blackness, then, served to be symbolic in many ways, for the United States and Japan, in the postwar period.