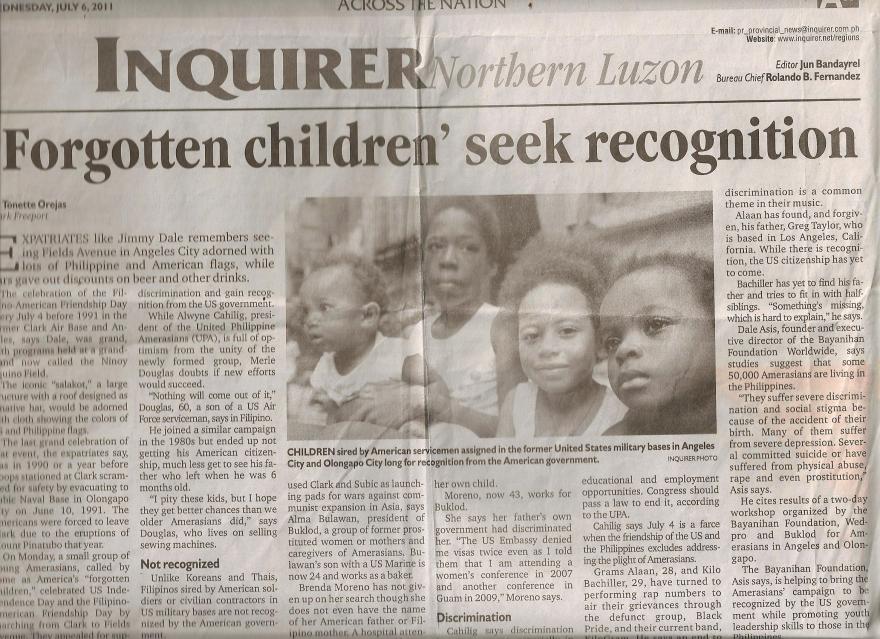 Discrimination and poverty are the norm for many children left by US servicemen serving in the Pacific.  In the Philippines, as it is with many nations around the world where US bases are active, orphaned children are the norm.

Often abandoned by their own mothers so as not to live with the scorn associated with being the mother of an American child, especially those fathered by African-Americans, along with the resulting poverty associated with being excluded by laws and cultural norms, many Amerasian children become street children, or grow up in orphanages.

For persons like those of my generation, who experienced Japan’s reckoning with this issue in the 1940s through the 70s, it took religious groups and the efforts of Pearl S. Buck to bring attention to the issue, as well as people like Miki Sawada of the Elizabeth Saunders School for Mixed Race Children in Japan.  The US government and the military, are always reluctant and lackadaisical, and frankly, racist, when it comes to this issue.  Out of sight, out of mind.

All contents, except where noted, are copyrighted and must have permission to be copied, duplicated, edited, downloaded, etc. You must have written and signed permission from me and have it verified before you can duplicate or download from this site.
Fredrick D. Kakinami Cloyd is available for readings, presentations, discussions on the topics related to the material. Visit the BOOK WEBSITE: http://dreamwaterchild.com
Loading Comments...
Comment
×
%d bloggers like this: