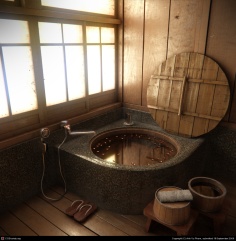 Rejuvenation in the mountains

Living in Japan from my earliest memory into childhood, and then returning when I was an early teen, included one of the most important and pleasurable events of most Japanese peoples’ daily and monthly life— bathing.  In Japan, bathing is not only a way to wash ourselves, and not only an individual pleasure, but a way of healing, relaxing, conversing with friend(s) and/or family, and ritual.

Many people are familiar with the Japanese bath in the home, which resembles what the Americans call a “hot tub.”  The tradition of bathing is not exclusive to Japan, of course.  While I was doing research in Turkey, it was a pleasure to learn of the Turkish bath traditions and to partake in its histories and pleasures there, and to think of the similarities and differences.

The private bath, in the home, is called お風呂 — Ofuro, in Japan, and is the most familiar to people outside of Japan.

But in addition to this, I want to mention some other bathing traditions in Japan, mainly the public baths.

When I was growing up in Japan, once a month, my mother and I would visit a neighborhood public bath — 銭湯 Sentō. In addition, once a year or two years, when my mother could afford it, she would take us to the hot springs baths ­­­—  温泉 Onsen.   The neighborhood public baths have been losing business and there are fewer and fewer in Japan nowadays, as people individualize and the tradition of bathing is becoming increasingly private and preferred. Also, public baths are getting expensive as well as Japanese people having less leisure time. Many corporations in Japan sponsor their workers’ public bathing. Even so, these remain important cultural traditions that would most likely never die out in Japan, and remain one of the special Japanese traditions of healing, cleaning, and relaxation.