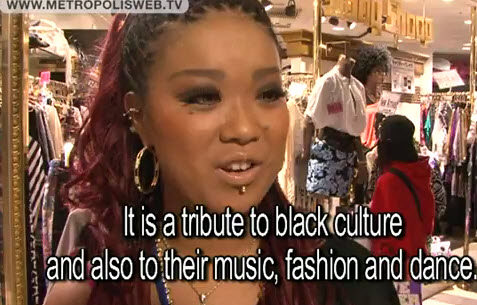 The boundaries of nation and national culture are solidified by this creation of the other.  It is not only imagery and prejudice however.  And prejudice is not always the old kind of name calling and ‘hate.’  Sometimes it shows up in other ways traditionally not thought of as “prejudice” or “race hate.”

In the globalizing era, the United States and the UK are the most dominant in the spread of Black imagery and imaginations around the globe. This is due to colonial, neo-colonial power.  Economically, politically and militarily, the US and UK have had the longest and widest histories of successful forms of cultural-political dominance.

Various kinds of ‘Black’ people have existed in Asia for centuries before contact with the US in the World War period. There has been widespread travel and contact between the many lands, including what is now called Africa, where black bodies were the norm.

Today, however, the spread of images of ‘black’ violence, poverty, and criminal behaviors have linked with previous European race science and time/space notions of primitiveness vs. progress, making condescending notions of assimilation to modern civility as the norm in response to so-called “negative” images of Black people, bodies, and what is now becoming increasingly a “black culture.”

This “black culture” is a homogenized notion controlled by US hip-hop imagery, mixed with the knowledge of Black oppression and resistance to white supremacy, where any confronting of the problematics associated with dominant racism is made into ‘negative’ while people want ‘positive’ images.  These escape mechanisms displace the work necessary for historical healing and deep change. In other words, concentrating on so-called ‘positive’ aspects of an already-homogenized and ahistorical ‘black,’ the positive images continue to control and civilize the pain and trauma that is made trivial, primitive, and psychologized the culprit in the first place.

In Japan, especially since the US/Allied Occupation period, contact with Black-America was associated with the memory of how white soldiers and officers and systems would separate themselves from, and make themselves superior to blacks, even while many blacks and whites formed intimate and warm relations, and while many Japanese men and women formed lifelong friendships with Blacks.  The stage had become more intensely set for an over-arching US American version of how to see and respond to Blackness.

When I was a child in Japan in the mid-to-late 1950s to early 60s, Blackness was associated with American-ness.  They were educated by the Meiji Restoration textbooks with the help of European and American race science proclaiming the Black man as being closer to apes and primitive animal behavior.  So it was when I was often called nigger or monkey.  Any show of emotion was met with hyper-fear and aggression.  Often, aggression via racism, was there before I had to do anything. The black body was formed in cultural imagination, intensified by the victorious American attitudes toward Blacks that were operating in Japan during the Occupation Period.

Although the Occupation of Japan by the Allies was officially over in 1952, all of the military bases remained intact. Thousands upon thousands of military personnel continued to pour into Japan, during the Korean War, and into the 70s and 80s in Japan.  Today, many of these bases have squeezed into Okinawa, but some remain.  Japan’s connection to the US is mainly a mutual defense mechanism bulwark against China and Russia, both nations having long histories with the US and Japan, with Japan’s history with them being centuries longer.  Japan and the US have agreed to help each other because they know that Asia, including Russia and China, has experienced both European colonialism directly or indirectly, and Japanese imperialism. Old feelings are reminders in the buildings, social and political systems, and the global one-world market system that oppressions and makes hierarchies in the present. Violences are not gone.

So nowadays in Japan, the black body is not so much feared or met with direct violence. Now it has swung to several hundred small claims against businesses and courts and corporations, and individuals who continue to discriminate against Africans and African-Americans in Japan.  There has been an increase in the use of the legal system against racism’s use by people and structures.  But even today, Japan has no formal, or particular laws that govern this kind of discrimination.  Japan’s treatment of Koreans, Okinawans, foreign workers, and others in Japan considered “non-Japanese” even though they may have been there for generations, continues to be largely racist, protected by the vagueness and therefore the personal interpretation of the judge that presides.

But in popular Japanese culture, the situation is much more mixed.  For me, exoticism is still a form of racism.  It is violent but much more acceptable by the targeted black person and those wanna-be Blacks.  The Wanna-Be blacks in Japan are largely men and women, boys and girls, who are disgusted and tired of the homogenized Japanese identity.  Often, they are on the fringes of Japanese society already, with views and ways of acting that have them being troubled in schools and who are rebellious.

Watch this video and see the interesting, wonderful, sad, problematic, useful, and ignorant ways in which blackness travels across cultures and how this is now a major part of Japanese culture.

It is interesting to note how Japanese must borrow an American media-learned notion of a black-ness, full of its imagery and representation from hip-hop culture, as a way to combat Japanese dominant cultural oppression.  The history of black bodies in Japan has been erased. Japan appears as having no other dominant history of contact between black bodies in Japan. Of course, there are other forms of resistance in Japan.  But the borrowing of blackness couple links with the Japanese love of global music and attempts to fill the gaping hole that war defeat (devastation and emptiness) and internalized oppression has left, impacting and shaping so much of Japanese culture since World War II.

Japanese intensity towards black bodies—either an exotic desire for, or extreme hostility toward, began before the arrival of US servicemen into Japan during the US Occupation and continued to today.  There were black slaves that came with the Europeans.  There was the race science that was vehemently anti-black, which was deeply embedded into the textbooks and sciences that the elite that wanted to modernize began, from the 15th Century (the Dutch, the Spanish, the Portuguese). It was the 19th Century when all positive images and writings regarding black peoples, began to change into primarily negative descriptions and teachings. The Occupation cemented the negativity.

Negative images of blacks came from China, as well, as there was occasional contact between African traders and merchants from as far back as the 5th Century.  In the 15th to 16th centuries, there were many positive paintings and writings about friendly and positive contact and curiosity regarding blacks in Japan.  These were slowly drummed out as increasing contact with white colonialists’ treatment of blacks became commonplace during colonialism’s height in the Pacific slave trade (Japan made slavery illegal in the 15th century after Europeans began taking more and more Japanese slaves). Japanese interest in Black bodies have changed in tone and are contested, along the lines with its amount of contact with European, Australian, and White-US writings.

The White Pacific can make whatever it wants to in its control of the circulation of images. The White Pacific is often not locatable but nevertheless there. Always contested but nevertheless the White has maintained the images of “black” in certain ways in white nations, transposing onto Japanese culture’s thoughts of what is white or black in design, fashion, skin-color, life and death.

The Global Pacific that is now a reality in people’s minds and hearts, makes history go underground, except for national (dominant group creation) forms of a single history with everyone in its boundaries psychically and territorially through inside/outside norms inside of its dominant imagery. All nations have had wars and devastation and genocides, massacres and destruction of communities deemed ‘other.’  Homogenized continually, the world spins because mainstream people want comfort and its maintenance, not resistance or social justice.  In Japan, such a thing called B-Style can only come about at the precipice where hatred, ‘other’ and desire converge. It is also a form of resistance to dominance. It is not either wrong or right.  It’s both, as most things are in a globalizing world.

B-Style is a pop counter-culture. It is foreign. Japan does not pay much attention to its own oppressed communities who are considered “darker,” except as media attractions and appropriations.  It has learned this from its globalization.  I would contend that this is much better than when I grew up in Japan–but only if Japan would dialogue more, and contest its laws and dominant policies toward democracy.  Japan doesn’t really have a ‘civil society’ like it is thought of in the US.  But Japan must now contend with what the US civil rights movement and its racialized pop culture and music movements have created within the confines of the dance between dominance and resistance.  It is not post-racial.  We have a long way to go before it is ‘post.’